In continuation of the fat loss myths series, this article will address how not being able to gain strength while dieting is a myth, but also how it’s counterproductive. How many times have you heard your gym buddies or fitness gurus say the following: “You will lose strength while losing fat. Deal with it.” The problem with this statement is that not only is it a complete fallacy, but more so that it’s one of the biggest mistakes people commit in their quest to be the best version of themselves. Result? Mediocre physiques and suboptimal results. Unless you are an elite powerlifter who’s been training for decades, there’s absolutely no reason you can’t gain strength EASILY while dieting. Let’s explore both sides of the coin.

Strength, in regards to weightlifting, is the ability to lift a certain amount of weight. Physiologically, it’s the ability to generate a certain amount of force. The misconception of not being able to gain strength while dieting stims from a misunderstanding of what strength is and how it is developed. From a physiological standpoint, strength is a mere combination of two things: 1) Neuromuscular drive. 2) Muscular drive. Up until recently, the common thought was that muscle’s cross sectional area is majorly responsible for strength expression. However, this changes when researchers found that strength expression is equally, if not more, contributed to by the central nervous system.
Simply, think of your muscles as a car and your central nervous system as the driver. Your car may be very fast, but unless you know how to drive, you won’t be able to get where you want. And vice versa. You may be the second Michael Schumacher, but unless you have a fast car, you won’t win the race. 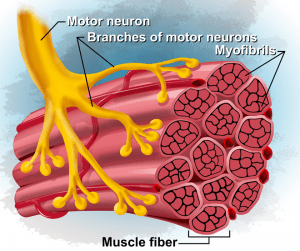 The human body is an incredibly sophisticated adaptive machine. When you give it the right stimulus, it quickly responds by adapting. Fortunately, strength training provides just the right stimulus. You may not be able to squat 225 lbs. for 5 reps today, but next time you attempt to squat the same weight you will most likely be able to do so. What happened? Well, two things: 1) Your muscles grew so they can handle that “threat” the next time. 2) Your central nervous system has become more efficient at recruiting your musculature to handle that weight. So, how does neural adaptation to resistance training occur?

A motor neuron is a nerve cell that originates in the CNS and ends at a muscle fiber in the neuromuscular junction. Motor neurons are attached to musculature throughout the body. Their function is to facilitate signals from the brain to muscle fibers to produce movement, or muscle contractions. When you perform resistance training, your brain sends signals to your nervous system to fire up the appropriate motor neurons to handle the implied resistance. Neural adaptations to resistance training occur by allowing the nervous system to become more efficient at firing up motors units and thus generate more force faster. Additionally, the nervous system learns where to send the signals so that they are not sent to the wrong muscles. If you are ding biceps curls, your nervous system is not interested in recruiting your muscles fibers in your legs. Ultimately, strength is developed through enhanced motor neuron firing.

In essence, you develop strength when your neuromuscular system adapts to implied resistance. It does so by becoming more efficient at firing motor neurons and thus recruiting more muscle fibers faster (generate more force faster), and by developing motor skills through establishing neural pathways.

So, the question becomes: How do we stimulate neuromuscular adaptation? Simple, you perform resistance training. However, the stimulus must be both consistent and strong. Which is another reason why lifting light weights for high reps is bullshit. If you consistently increase the stimulus strength, your nervous system will adapt, period.
Another important component of neuromuscular adaptation is, of course, recovery. So, how do we allow the CNS to recover properly? 1) Follow an intelligently-designed training program that provides just the right stimulus while allowing adequate recovery time. 2) SLEEP! Aim to get 7-9 hours of QUALITY sleep every night. 3) Eat a well-balanced diet that’s built on whole foods. However, it’s crucial to note that energy intake has little to no effect on nervous system recovery, though not enough studies have investigated this topic. Which is another reason why it should be expected of every serious trainee to increase their strength levels despite having lower energy intakes than usual.

You might be wondering how food (energy) intake doesn’t affect nervous system recovery. In their book “Not Eating Enough.”, the Institute of Medicine (US) Committee on Military Nutrition Research addressed the correlation between physical performance and caloric restriction. The book addressed experiments in which soldiers could maintain and even improve their physical performance despite having low energy intakes. Simply, one needs to look at how hard soldiers train and compare that to their low energy intakes -they eat very little for days in a row- and a trend will be noticed: physical performance is maintained and even improved. In a study, the researchers concluded that performance is well-maintained during periods of caloric restriction even when subjects lost up to 10% of their original body weight (Taylor et al. 1957). Moreover, when subjects’ performance and work capacity suffered, researchers found that the effect took place because of loss of muscle mass, poorer muscle oxidation and less oxygen in the blood. Meaning, neuromuscular drive was most likely well-maintained given that the stimulus was still present. Weiss et al. (2007) compared the effects of caloric restriction and exercise on fat loss and performance. The researchers concluded that caloric restriction leads to decreased performance due to loss of muscle mass and thus strength. However, when exercise was used to create the energy deficit, subjects maintained and even improved their performance. This could also be an indicator of muscle gain. Conclusion? You can gain strength and improve your performance in a calorie deficit.

Another component of strength is how much muscle you have and how big your muscles are. The larger and more muscles you have, the more force they can generate. The larger the contractile area, the harder they can contract. As many of you know already, strength is a prerequisite of muscle hypertrophy. The stronger you are, the more weights you can lift, which means more resistance (stronger stimulus) to your muscles. Thus, your muscles will adapt accordingly. Muscle hypertrophy occurs in two ways:

Unlike neuromuscular adaptation, muscle hypertrophy is influenced by energy intake in that protein synthesis rate and hormonal levels are not as optimal as they would be during normal feeding periods. Yet, this doesn’t mean you can’t build muscle while in a caloric deficit. This just means that your ability to build muscle in an energy deficit will be hindered when compared to being in an energy surplus.

The power of placebo and negative thoughts

The power of placebo is not to be underestimated. In a study, researchers told 15 young serious athletes they were selected to receive a steroid (Dianabol). However, the researchers gave 6 of them a placebo. Result? Those 6 subjects who received the placebo increased their strength by 321%! In another study, advanced subjects whom were given the same dosage of Dianabol improved their strength by a mere few percentages! Thus, it shouldn’t be hard to conclude why telling someone they can’t gain strength in a caloric deficit affects their performance and ability to gain strength. Another study assessed the reaction time of 40 tennis players when exposed to both positive and negative stimuli. The researchers found that positive and negative stimuli led to improved and impaired performance, respectively.

Bottom line
Strength is a by-product of both neuromuscular recruitment that leads to muscle activation and muscular drive. Moderate caloric restrictions have not been found to affect overall performance and work capacity. Moreover, energy intake doesn’t seem to hinder nervous system recovery. So, if you want to gain strength, and thus muscle, while losing fat, make sure you sleep well, follow a training program that provides strong and consistent stimulus and allows for adequate recovery, create a moderate caloric deficit so you don’t impair protein synthesis by much, and eat an adequate amount of protein. Dieting should not be an excuse to lose strength, but you should strive to continue making progress under all circumstances. Give your body what it needs and it’ll give you back more than what you had anticipated.