Cheat meals!!!
“Look at that massive cheesecake! How does he stay lean while eating like that?”
“Fries, pizza, and ice cream while staying? He must be genetically gifted.”
“This guy stays shredded year-round while eating junk. He must have a fast metabolism.”
We’ve all had similar thoughts. Thanks to social media, especially Instagram, many bodybuilders and other popular fitness figures have made everyone jealous through their pictures of fancy meals and junk food. Some individuals post such pictures intentionally so they can grab the average Joe’s attention and have him think that they hold the key to perfect aesthetics while eating garbage. Others do not mean any harm. Either way, the outcome is the same – people become baffled at how those individuals eat so much without becoming fat. When those individuals are asked about their eating habits, their answers are rather ambiguous. Looks are deceiving. Allow me to give you the red pill and show you how deep the rabbit hole really is.

Let me start off by saying that not all fitness figures take steroids/drugs. Despite what many claim, steroids work, and they work very well. However, there is a limit to everything, including steroids. You can take all the drugs in the world, but if you are constantly eating poorly, your physical appearance will suffer. No other way around it. What steroids do however, is increase one’s threshold of pushing things. In this particular example, while a natural lifter can get away with eating poorly once or twice a week, an enhanced lifter will be able to cheat more frequently without causing any substantial damage. This is mainly because steroids significantly increase protein synthesis, improve nutrient partitioning, accelerate fat oxidation rate (fat loss), and increase energy expenditure. Thus, an enhanced lifter will burn more calories at rest than a natural lifter. Moreover, an enhanced lifter will have a more favorable environment to build muscle than a natural lifter. Thus, most calories and nutrients consumed will be used to build muscle. Conclusion? Many fitness figures take steroids, which allow them to eat more, cheat more often, and look phenomenal. However, they still claim “natty” to protect themselves from “Johnny Law” and to preserve their professional contracts with supplement companies.

We all have this one friend who eats junk every day and never gains fat! As usual, genetics play a significant role. In these situations, the general public is quick to point the finger at metabolism, claiming that those genetically-gifted individuals must have super-fast metabolisms. This is both correct and incorrect. Some individuals do have fast metabolisms, but their metabolisms are not as fast as you may think. This study found that the difference between “fast” and “slow” metabolic rates is a few hundred calories AT MOST! YES, at most! This tells us that majority of the population will be within 200-300 calories of each other. However, those on both sides of the extremes (very slow and very fast) will have a 600-calorie-gap which is quite significant. An individual’s metabolic rate is highly dependent on how much lean tissue this person has as well as how large his/her organs are. Which is why taller individuals will always have “faster” metabolisms than shorter individuals. In the grand scheme of things, metabolic rates are the same because they are relative to one’s body. For instance, a person’s organs’ sizes are proportional to his height/age. Thus, a larger/taller individual will require more energy merely because his body requires more energy to carry out its functions. With that said, some individuals have fast metabolisms due to hyperactive thyroids. However, hyperthyroidism is not something you want to have. Hormones play a key role as well. A man who has high testosterone levels will gain less fat than a man with low testosterone levels. Why? Because high testosterone levels allow for better nutrient partitioning. Thus, more nutrients/calories will be shuttled to muscle mass as opposed to fat mass. This will result in less fat gains and a leaner look. Another powerful hormone to keep in mind is insulin. Insulin, the storage hormone, is responsible for shuttling nutrients to both muscle and fat tissues. Some people are more insulin sensitive than others. Being insulin sensitive allows those individuals to shuttle more nutrients to muscle tissue, which is more metabolically active, than fat tissue. Higher growth hormone levels will also allow for better nutrient partitioning. Bottom line – Some people burn slightly more calories than most people. This coupled with optimal hormonal levels, more lean tissue, and more anabolic environments allow those genetically-gifted individuals to cheat more often than us, mortals. 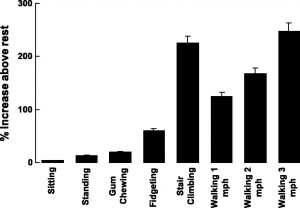 Another equally-important determinant of metabolic rate and a very underrated one is activity level. A construction worker who does hard labor day-in and day-out will expend significantly more energy than an individual who sits in an office all day. A person who exercises more frequently will also burn more calories than someone who exercises less frequently. Non-exercise activity thermogenesis also plays a crucial role in determining one’s metabolic rate. Some individuals are naturally inclined to move more than others. Bumping to music, shaking, dancing, bobbing one’s head, playing with objects are all examples of NEAT. Someone who does such movements throughout the day will more likely burn more calories than someone who doesn’t move much. The net outcome is a couple of hundred extra calories burnt by the end of the day.

4- They don’t cheat that often!

Unfortunately, you’ve been led to believe than fitness figures eat the way they allegedly do all the time. Here is a reality check: They don’t! “Why would they lie?”, you might ask yourself. Well, if I “show” you that I can eat chocolate, hamburgers, fries, ice cream, and pizza while staying shredded, won’t you want to know my “secret”? I guess you know where I am going with this. Doing so is a powerful marketing strategy to promote those figures’ “coaching” services as well as their supplements line and/or their sponsors’ products. Simply put, they want to make money off you. They want you to buy their magical products and out-of-this-world coaching services that will somehow turn you into this superhuman who can eats whatever the hell he/she wants while looking the part. Yea, right!! 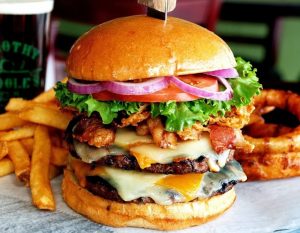 When all is said and done, calories matter the most. You can eat tons of junk food, but if you are still in a caloric deficit, you won’t gain weight. Some fitness figures follow certain dietary protocols that allow them to cheat a bit more often than most people. Such protocols include IIFYM and intermittent fasting. If you save some of your calories throughout the day, you’ll be able to “spend” those calories on more calorie-dense food options.

Even though I am not a huge proponent of cardio, it is still important for overall health and function. As stated in my fat loss myths series, most bodybuilders do cardio, especially low intensity cardio, just to eat a bit more. Burning 100-300 calories more per day by walking or performing similar low-intensity cardiovascular activity will all those individuals to eat back an extra 100-300 calories without affecting their caloric intake.

Yes, you read that right. Fake cheat meals are everywhere. I might show you a picture of my last “cheat” meal, which was jello with chocolate pudding. Your brain will race trying to find out how many calories that cheat meal was. Under normal circumstances, a similar treat will probably contain anywhere between 400-700 calories. In reality, I ate sugar-free jello coupled with fat-free sugar-free pudding. How many calories did that meal cost me? About 200 calories! Significant difference, eh? The point is that what may seem like a normal cheat meal to you will be often made of less calorie-dense ingredients to make the meal have significantly less calories. Once again, looks are deceiving.

Bottom Line
Don’t believe everything you see on social media. We live in world where “faking” things is easy. Posting a picture of a huge cheat meal on Instagram is not indicative of anything other than someone wants you to believe that they have the holy grail to eating poorly and staying lean. Reality says otherwise. Genetic variances, activity levels, NEAT, and certain dietary protocols are better predictors for one’s ability to have cheat meals. With that said, a sound nutrition plan and intelligent training program will allow you to enjoy your favorite foods while staying lean, given that you are watching your calories, of course. At the end of the day, energy intake remains the most important factor of gaining and losing weight. Fitness figures don’t and CAN’T eat junk every day. While you may see that on their social media accounts, they are often eating “boring” foods when no one is looking.